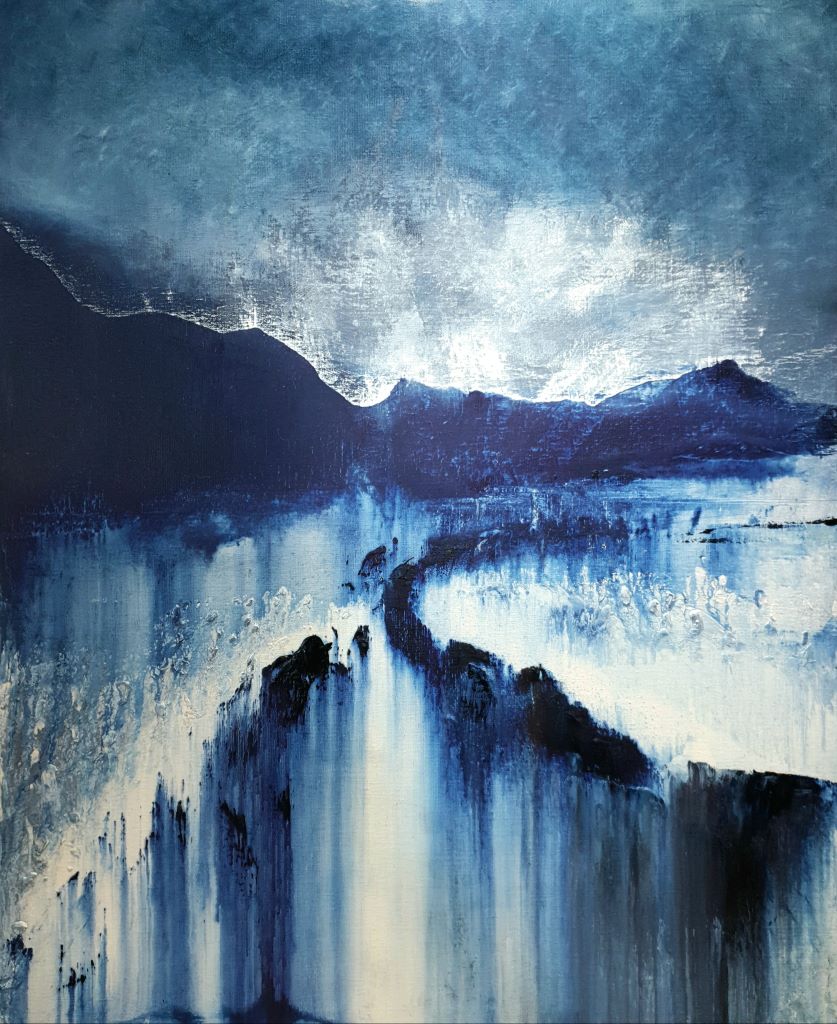 His contemplative approach to the landscape translates a mystical vision of nature and life. It emphasizes the importance of atmospheric rendering and light effects announcing the journey from one world to another.

"We live in an enigmatic universe where there is a secret communication between the sensitive natural world and the invisible surreal world, and I seek to show it"

After having lived an experience at the frontiers of death, Dominique Meunier is driven by the desire to make perceptible the link between reality, vital territory and the dark space of finitude. A journey from one universe to another like a journey in which nothing is lost and everything is transformed. On his canvas, this passage results in an expansion-retraction that spreads in a circular or horizontal and vertical way, from the earth to the sky and vice versa. The composition proliferates like an atomic cloud, captured in its eternal explosion. In this process of emergence, silence takes its place. It marks a temporal suspension, a space in a feeling of eternity.

According to his intuition and the encounter with the vagaries of the material, the artist intervenes in the state of upheaval. Fascinated by the imprint of time on the material, he searches, digs, scrapes by touches and textured effects using biological mortars and different structural pastes. With his knife, his trowel and his hand, he creates a background. It is a work in mutation towards the essential which ends in a stripping down. It is supported by relatively sober chromatic variations, nuanced with blue, black and golden creams. Then, using natural pigments, acrylic and oil, the painter composes fragments, accidents.

“ I work 'alla-prima', in the cool with rapid movements, I would say almost physical. There, begins a game of construction, deconstruction and thickness. I sculpt, I seek to magnify the material, to spiritualize it. I do not freeze, I give myself the opportunity to see the birth of the second impression, one which, from torment to appeasement, allows me to see more clearly. "

It's all about progress and movement. The movements guided by the hand of the artist, participate in this impression of open trajectory, of feeling of going beyond, beyond the limit, of the border, towards a destiny worked with the care to revitalize its contingency .

The effects of textures, impasto and modulations by addition and withdrawal, orient towards a dynamic balance, an impression of continuity. The breaks, cracks and cracks bring a form to the space which connects and separates.

“  I seek to constantly analyze the lines, veins, hollows, interstices, telluric rhythms and magmatic movements to open passages towards the plenitude of the sensitive and to show the unspeakable by the flows of light on the canvas which reveal the divine in the nature and in humans. "

In a logic of plant and organic link, the harmony of the relationship between man and nature takes on a new dimension. The painter lives in the countryside, the trees surround his studio. “ The tree is energy, in perpetual motion, often in the almost invisible. He wants to be understood and speaks his way. He takes the body to witness and he entrusts us with his messages. Pillar of the world within which it provides balance, there are t man's spiritual becoming "

Trees, forests, fields , skies, mountains… The landscapes unfold and offer an innumerable number of appearances to the state of enigmas. These are areas of questioning dictated by the random where the spectator constructs his own representation. Abstract forms combine with other syncretic entities; iconic signs , of Suger attendance ant more archaic perceptions  : a Christ on the cross, a body, a portal ... These indices bring order into chaos and help to capture the ephemeral. Their appearance-disappearance responds to the praise of the gesture of the artist who questions the spiritual.

Conceived as as many substitutions as unexpected connections, Dominique Meunier's work reads like an endless continuum. From depth to illumination, from darkness to revelation, this truly dazzling journey of reinvented, jostled landscapes brings a piece of dream, a gateway where the memento mori resonates . Ecstasy is poetic, vibrant and melancholy. 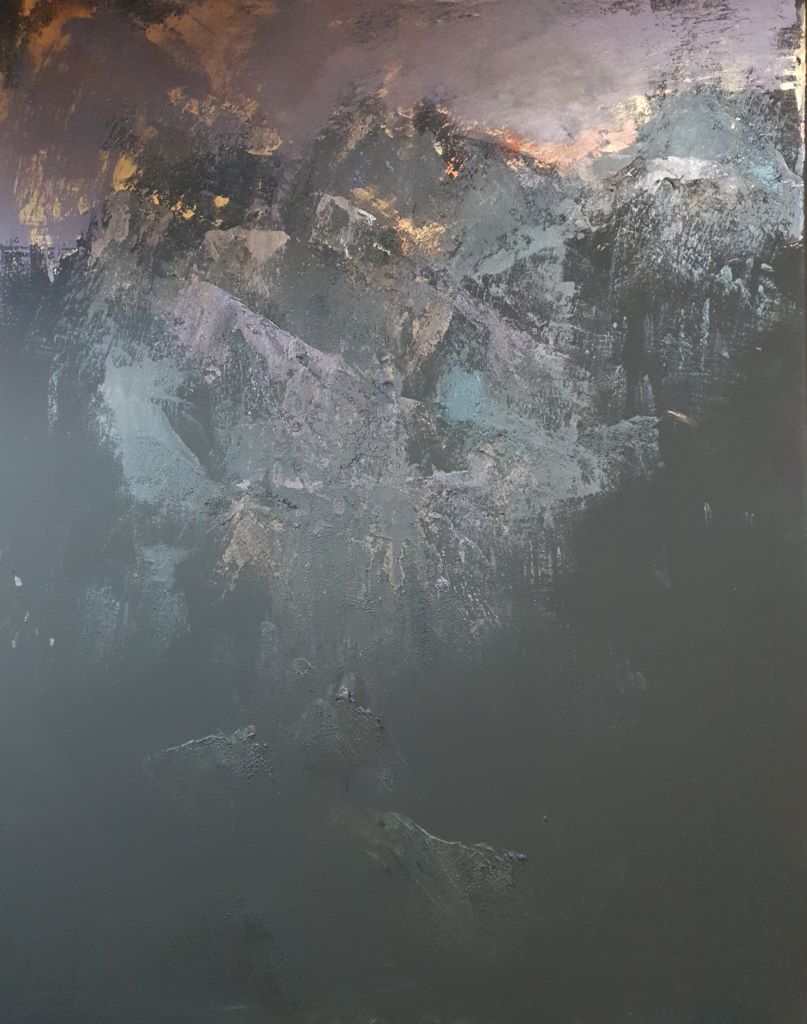 In a passage, the impression of catharsis.

At first glance, Dominique Meunier’s work is characterized by its radical composition and by its voids and realistic silences. It is distinguished by the obvious austerity of its shapes and by its dull and closely defined colour range. But the famous saying “Things are not always as they seem, appearances can be deceiving” holds true again when compared to Meunier’s artwork. As the perfect balance of yin and yang, his paintings also have filled forms and embracing curves. His work should be read as a genuine elegy to nature’s beauty in its most inspiring and soothing form.

His production process is complex and lengthy. Once the sand mortar is dry, he gets back to paint and pigments. He then removes by hand or using a trowel or a knife to adjust his work. As a philosopher, he does not let his work become static; he gives the opportunity for a second print birth which, by mending torments, allows us to see more clearly. His gesture is concrete, tangible and powerful as a breath; his painting is incorporated. The colour shades are warm, plant-based and mineral-based.

Before him, many famous impressionist painters left workshops and chose landscape as their preferred model. For several years, Paul Cézanne has painted ‘Saint Victoire’ and has put it in the foreground in order to find a way to reproduce the mountain’s unique convex shade. Dominique Meunier questions the vibrant, symbolic and bright side of nature. He prospects in the steadiness and the lines of a mountain in response to watercourse energy and depth. It’s an invitation to walk along winding side roads, like turning the pages of an introspective sketchbook of a meditative walker. The frequent close-ups and the narrow frameworks lead to out-field views. It’s in this gap and in the painting cracks where a cathartic search begins.

Dominique Meunier has had a near-death experience a few year ago.

Memories remained after this event, but also the ‘passage’ topic which is highly visible in his artwork. Many of his works refer to a Chinese poem dating back to the third century, written by Tao Yuanming, the father of landscape poetry. The poem tells a tale about a man who randomly discovers, while fishing, a passage leading into a happy, utopian and forgotten country. The fisherman, despite the numerous markings he left on the way, could never get back to the entrance of the secret world, with the persistent scent of peach blossoms.

It seems that, in Taoists beliefs, peach tree is the symbol of immortality.

For the artist, those fundamental and artistic journeys seem to have no other purpose than to lead us to the forgotten fulfilment path. The peace prevailing in the poetry and the balance of his landscapes takes us, in between transience and persistence, to a meditative state.

The nature seems to provide him an inexhaustible source of inspiration. As Claude Monet in Giverny before him, Dominique Meunier has his own indoor water garden. In the idealism of a reinvented Chinese nature and the Zen atmosphere of a Japanese garden, water lilies are floating, as well as the impression of a newfound absolute. 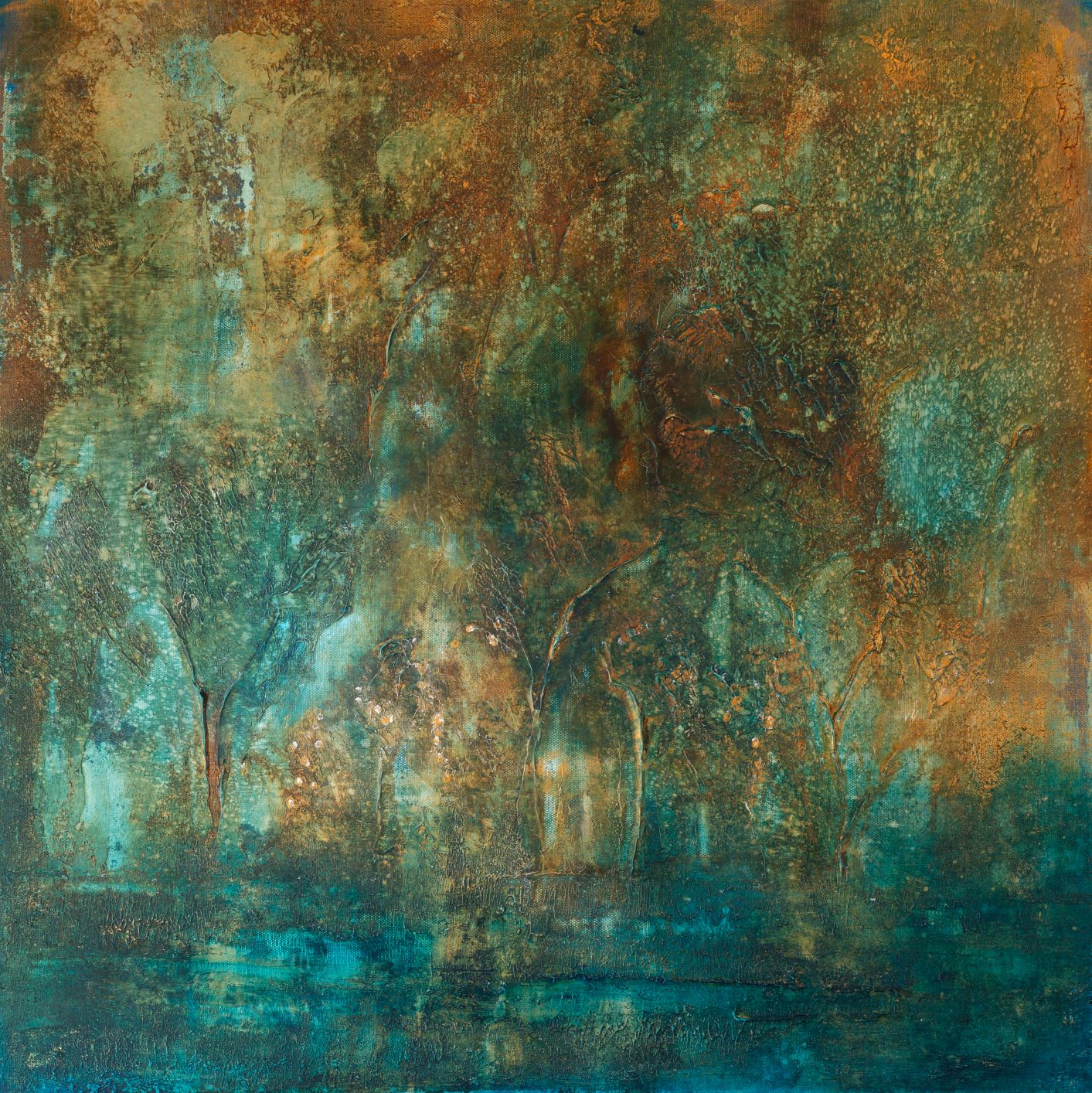 “In looks like a lit up forest. Like a bouquet of light whose trees take their source in the depths of shimmering water.” (Dominique Meunier)

"Renaissance" (rebirth) is the access key to enter the world of the French artist Dominique Meunier. We can define his as an art that refers to the poetics of spiritual, of the sensational research of a soul traveller who remains ecstatic in front of the perfect harmony of the nature. In looks like a lit up forest. Like a bouquet of light whose trees take their source in the depths of shimmering water, writes the artist about his work. A catharsis, a purification of the body and of the spirit that seeks itself in the original union with the nature. The work isn’t a representation of a landscape, but it is the essence of itself, because the artist shows us the pshyco-perpectual emotions caused by the immersion in the bright colors of the forest, emblem of life. Following the movement of the work, from below, from the water, towards the frond of the trees, the reference to impressionism painting is clear, to the sensational painting of Claude Monet, visible in his chromatic study about the light effects on water. If the painter of Giverny captures the light vibrations of the nature through the contrasting brushstrokes, Dominique Meunier goes over, proposing us a new painting, synthesis between the chromatic shades and the material expressiveness. Going on with the reading, we can see how the trees grow up from the water depths, and their branches spread in multiple directions as the multiple ways of life. Also the color changes in harmony with the metamorphosis of the composition, blending the blue and verdant shades with the various colors of the earth. In this choice we can read the target of the artist who wants take us in a golden reality, that is at the same time changing and essential; an heavenly dream where spirituality and aesthetic blend to open the way to the multiple shades of the possible. As every living being, the spiritual evanescence conforms with the structure of the picture, fruit of a material and essential painting. In this we can find the echoes of the informal picture that searches the energetic and evocative potential of the matter that releases from the image to leave space at the pictorial sensorially. In this way the artist shows us his painting searching a feeling that goes over the apparent vision. The work through the artist talks with us passes through our senses with delicacy, transporting us in a silent evanescent world, that touches our sensitive strings by the material vibrations present in the composition. Technical and compositional variety are the fruit of the painting ability of the artist who freeing himself from any kind of style, makes himself free interpreter of the multiplicity of the reality. The work present here is the result of a vision in constant material, perceptual and sensorial change, that point out the passage between body and soul, between concrete and abstract, between dream and reality, in a infinitive existential research aimed at exceeding the limits, to reach the primordial unit among man and cosmos. The vision of the world opens before our eyes and becomes universe, with its infinitive variety of shades and possibilities, thanks to which the man is free to choose and change form in the continues vital metamorphosis.