Excerpt from the text of Martine PIERRE-PILON, philosopher and author, painter-engraver, on the painting “My path” 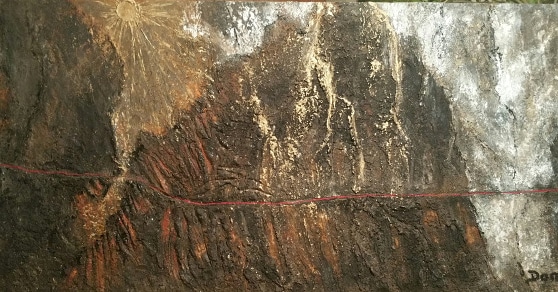 «My path» is exhausted between tearing and dazzling on the one hand and records on the other hand the intensity of a crossing that there, in the distance, rests on a divine elsewhere... like a life cut in its drunken hem....

Between the exterior of a sparkling aurora and the interior of a new light, «My Path” captures the appearance of the sacred, of a passage in the morning wind between the glide of the rocks of solitude, their revelation of heavenly Light and the luminous gush of a birth brought to incandescence.

The painter returns from an entrance into the Light, the one that comes from the real around the over-real that became the figure of Eternity. Here the fragile crossing between geological and telluric strata spreads towards the presence of the Mystery, its essential axis in the first step of the day. A miracle takes place and is renewed in the painter’s colours: this perpetual harmonic of a rebirth that is always repeated.

"My path" is bathed in the enchantment of the earth, until it gives us to see what is undone tomorrow and forever. It announces a vibrant enthusiasm of rebirth.... Founded in a unity of contrast, it offers us the trial of an in-between world.

Only one thing is to be expected from Dominique MEUNIER’s painting: its paintbrush and its colours that in their brilliance rekindles the light upwards. The painter came out of himself, tangentially, repainting the sky for every Man in the night. In this gift of light, Dominique MEUNIER powdered the world with a wisdom as the open sky to the East, where our days are born.

Here comes the time for song and praise. A painter who brings stars into the endless space of the rustles of silence, Dominique MEUNIER takes his path back, saying the absolute beauty. His voice of living light.

Excerpt from the text of Christine Ramoni, daughter of the Swiss painter and glass maker, Bodjol on the painting «Ocean» 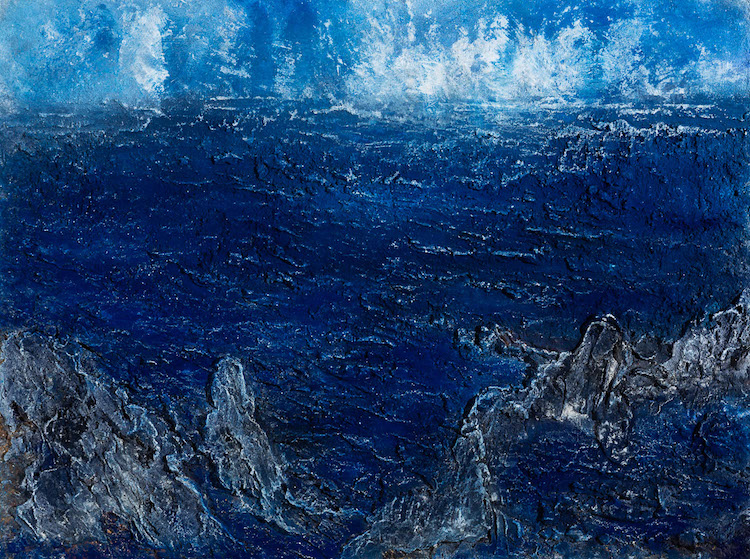 The linearity of the sky, which melts into the water, attracts our gaze, where we would almost feel the mist touching us.

The light and depth, the infinity, that Dominique Meunier wanted to represent in his painting, reminds us that we are not just a drop in the absolute, which appears and disappears, but rather, we are the entire absolute! Mankind is not lost in the universe; it returns to its normal condition and meshes with the cosmic order. Its absence here underlines its invisible presence and the depth of its soul.

The rocks question us, which seem to define and retain the power of this water, where everyone can thus refer to its own feeling, to his experience, leaving the free choice to his sensitivity. Sometimes walls against oceanic forces, protective refuges from the opposing currents, Quintessence of Sky and Earth that shaped them equal to living beings by endowing them with the vital energy, breath of the universe, the rocks are here. The timeless guardians of time that steer the passages for the wide sea, the distant horizons, the dream, but also the journey of resilience.

Dominique Meunier in this way, takes us to a dreamlike and subtle world. He introduces a tension, between the real and the imaginary, what we think we see, between the visible and the hidden, every painting can hide many things. The painter passes on to us his spiritual dimension, his profound nature, his inner path, his mental calm. The meditative state but also the reminiscence that can be painful when the currents prevail.